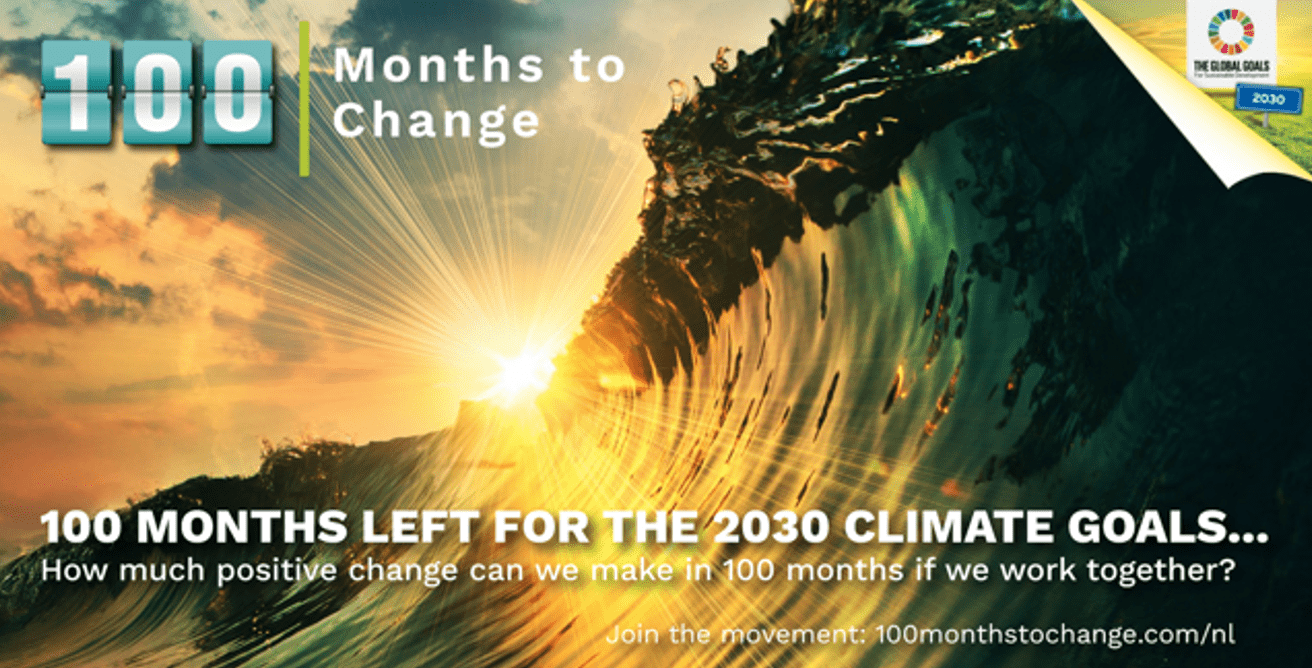 To achieve a 55% reduction in greenhouse gases by 2030, a collective of climate pioneers, including Yvette Watson of The 2B Collective, is launching a global program, 100 Months to Change, on September 1.

Because we have only 100 months left to achieve the essential climate goals by 2030, this collaborative initiative aims to engage professionals in government, business, and education to take actual action. What is remarkable about this initiative is the scale and form in which it is deployed, which ensure that many organizations are given inspiration and tools to quickly reduce greenhouse gases. The driving force is an experienced team of climate pioneers, known among other things from the introduction of the film An Inconvenient Truth, the National Sustainability Congress, and Sustainable Built Environment.

Urgency: action is needed now to achieve the 2030 climate targets

Only 40% of all companies have set climate targets and only 10% of those targets are met. The Dutch government also seems unlikely to meet the 2030 climate targets. The climate issue is really about people. If we do not set targets, we will not achieve the 55%. Where there is already an action, we can still do so much more if we organize it cleverly. We learned this from the pioneers, who have years of experience with climate solutions. With this program, we are going to apply all that experience very quickly in all sectors. This will increase the likelihood that we will achieve our goals.

100 Months to Change is the name of the campaign and community that challenges leaders and professionals worldwide. It is a transformational program that consists of sharing inspiring stories of pioneers and an action program that facilitates actions and measures impact. Pioneer stories prove that it is possible to organize positive change and thereby contribute to solving the climate challenges. Milestones in the first year of the program are premieres of the film Beyond Zero in various countries. In the Netherlands, this will be at the 20th National Sustainability Congress on November 11.

Climate pioneer Maurits Groen, who previously successfully introduced the Al Gore film in the Netherlands, says: 'It is a unique story of pioneer Ray Anderson who started in 1994 to transform his company, flooring manufacturer Interface, into a company with a positive impact on the climate. They now make products that sequester more net CO2 than they emit. This is an inspiration for many. The film shows that it is possible, but especially how to do it concretely. A film like this now needs to be shown on a large scale. That is why I am working on this. People like Paul Polman and various academics are very positive about the film'.

Folkert van der Molen: 'Twenty years ago, I started the National Sustainability Congress. This is now the longest existing sustainability congress in the world. We are hosting the Dutch premiere of Beyond Zero at this year's congress and that will be an inspiring kick-off for the much-needed acceleration. Ray Anderson had his only major appearance in the Netherlands at this congress in 2004 and it was very inspiring back then. I will be making a strong case for organizing the stage for the follow-up to 100 Months to Change in the coming years. This year in The Netherlands it starts with this premiere, with a theater full of directors and boards that we challenge to go the extra mile with all their professionals. With a large group of ambassadors and a smart tech tool we reach many organizations. The experiences of pioneers like Ray prove that it is important to involve everyone. Kef van Helbergen of Compass Group is collaborating on the program and urges his fellow CEOs to watch the film: 'climate change is a tough challenge, and we really need everyone.'

About 100 Months to Change

100 Months to Change is an initiative started in the U.S. by climate pioneers committed to taking concrete action to meet the climate goals by 2030 – 100 months from the program's inception. Through inspiring events, inciting concrete action, and a community of changemakers, the group gets professionals in government, education, and business thinking about the short time left to learn how to deal with the effects of climate change. With a smart tech tool knowledge is gained and shared, and relevant insights are gained with the help of data.

Sign up for the newsletter and stay up to date with our community.

We use cookies on our website. Some of them are essential for the operation of the site, while others help us to improve this site and the user experience (tracking cookies). You can decide for yourself whether you want to allow cookies or not. Please note that if you reject them, you may not be able to use all the functionalities of the site.